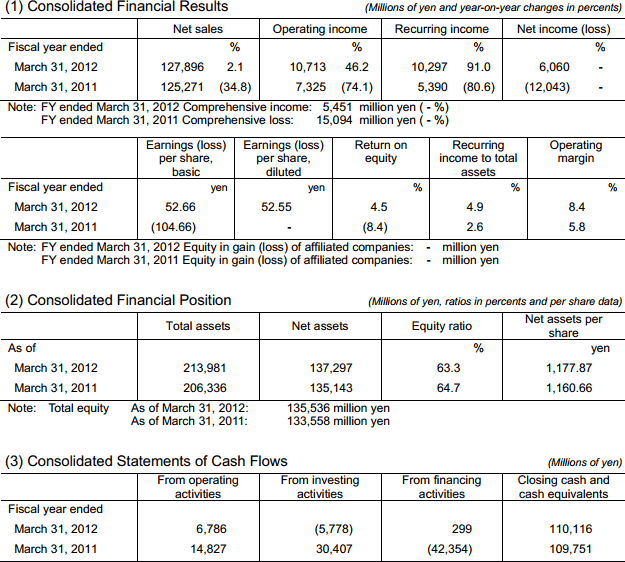 The Square Enix Group (the "Group") is continuing determined efforts to strengthen the competitiveness and profitability of its business segments of Digital Entertainment, Amusement, Publication and Merchandising.

A discussion of results by segment for the fiscal year ended March 31, 2012 follows.

During the fiscal year ended March 31, 2012, due to the completion of larger serial manga titles, monthly magazines and comic books stagnated on sales. On the other hand, the Group has been dedicated to developing network-based publication businesses including the Group's GANGAN ONLINE, a web-based comic magazine.

The Merchandising segment includes the planning, production, distribution and licensing of derivative products of titles owned by the Group.

During the fiscal year ended March 31, 2012, the Group continued to distribute and license items such as character goods and soundtracks based on the Group's own IPs while diversifying new opportunities for profit by strengthening its character goods lineup with additional products based on third party content and overseas expansions.

The Group is prepared to meet the new business environment that is expanding its customer base through the proliferation of broadband networks and a wider selection of digital entertainment environment. The Group views this change as an opportunity to capture new profit sources and are making every effort to expand its financially well-established network related businesses to have the Group's attractive content enjoyed by an ever-growing number of customers.

In the current fiscal year ending March 31, 2013, the Group is focusing all efforts on a substantial earnings improvement.

(i) Assets, liabilities and net assets

As of March 31, 2012, total current assets were ¥172,161 million, increasing by 4.8% compared to the prior fiscal year. This was mainly due to increases in content production account of ¥5,157 million and notes and accounts receivable of ¥2,957 million, respectively.

Fixed assets were ¥41,819 million, decreasing by 0.5% compared to the prior fiscal year. This was mainly due to a decrease in deferred tax assets by ¥621 million, offset by an increase in rental deposits of ¥469 million.

Non-current liabilities increased by 0.5% to ¥42,906 million. The increase was mainly due to an increase in allowance for employees' retirement benefits of ¥747 million, offset by a decrease of ¥508 million in asset retirement obligation.

Net cash provided by operating activities during the fiscal year ended March 31, 2012 totaled ¥6,786 million (a decrease of 54.2% compared to the prior fiscal year).

Income before income taxes and minority interests of ¥9,866 million, increases in inventories of ¥5,137 million and notes and accounts receivable-trade of ¥3,008 million, and depreciation and amortization of ¥5,039 million led to the overall provision of cash from operating activities.

Net cash provided by financing activities totaled ¥299 million (compared to net cash used in financing activities of ¥42,354 million in the prior fiscal year). The main factors are an increase in short-term loans payable of ¥3,791 million and cash dividends paid of ¥3,446 million.

The Group recognizes the return of profits to shareholders as one of its most important management tasks. The Group maintains internal reserves to enable priority to be given to investments that will enhance the value of the Group. Such investments may include capital investments and M&A for the purpose of expanding existing businesses and developing new businesses. The retention of internal reserves is done while also taking into account return to shareholders, operating performance and the optimal balance for stable dividends. The Group therefore strives to maintain stable and continuous dividends. The portion of dividends linked to operating results is determined by setting a consolidated payout ratio target of approximately 30%.

Regarding dividend payments for the fiscal year ended March 31, 2012, the Group projects annual dividends of 30 yen per share, including 20 yen per share to be submitted for resolution at the Board of Directors' Meeting planned for May 18, 2012.