IDATE provides regular analyses of the main trends shaping the world's mobile markets: networks, devices and services. On the occasion of the LTE [1] World Summit in Barcelona (May, 22-24) IDATE provides its latest analyses and forecasts for the world LTE market. 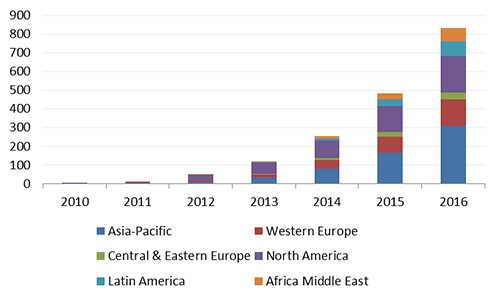 After the pioneer launch by TeliaSonera in Stockholm in late 2009 and the fi rst deployments in 2010, LTE rollouts picked up speed in 2011. By the end of the year, there were more than 9 million LTE subscribers - of whom more than half were Verizon Wireless customers in the United States - employing more than 30 LTE networks worldwide. The 4G ecosystem is spreading quickly, and over 200 cellular operators are now deploying the technology. There will likely be more than 800 million LTE accounts worldwide by the end of 2016, thanks to confirmed operator interest in long term evolution and in "true 4G", LTE-Advanced. The tug will come with massive growth potential in Asia-Pacific - led by China and India with TD-LTE, but also South Korea and Japan - and increased competition in the United States now that Clearwire, Sprint and Dish have elected to invest heavily in LTE, to be followed by LTE-Advanced starting in 2013. The adoption of 4G in Europe has been slower, with mobile operators investing only gradually, apace with the increase in data traffic.

One of the main reasons mobile operators are deploying LTE is to deliver faster connections - up to a maximum 50 to 70 Mbps downstream - and to handle the tremendous surge in data traffi c. These fourth-generation systems are more spectrum-efficient than 3G, and with LTE-Advanced they are expected to reduce per-Gb prices by 10 times on wireless channels, while supplying even faster connections than LTE. In January 2012, the ITU announced that LTE-Advancedand 802.16m (or WirelessMAN Advanced, the evolution of mobile WiMAX) standards had been accepted as the standards for the next generation of mobile systems, referred to as "MT-Advanced" or "true 4G". They enable bitrates of up to 1 Gbps in low mobility and 100 Mbps in high mobility, with low latency and the ability to use to large channels of up to 100 MHz.

No-one doubts that LTE will dominate the 4G landscape and will overshadow mobile WiMAX, especially since LTE TDD and FDD duplex schemes will cohabitate and complete one another on both networks and devices starting this year.

There are nevertheless still some stumbling blocks for LTE, not least the fragmentation of LTE spectrum and, of course, as is the way in the early days of every new generation of mobile system, the lack of compatible devices.

Even though a number of LTE-compatible devices have been available since early 2011 - smartphones, tablets, dongles, routers, M2M modules - manufacturers havingbeen concentrating on the American market, and on supplying Verizon Wireless in particular.

Upsets on the horizon

In terms of spending on mobile network, operators in Europe are working to minimise the impact of LTE, with expenditures that grew by a very slight 2.6% in 2010, whereas over in North America cellcos increased their spending on mobile networks by around 10 billion USD from 2009 to 2012. LTE could give operator income a boost, and new rate plans are being introduced that

have raised both bitrates and monthly caps on traffic. In terms of services, telematic and HD video capabilities, along with services in the cloud such as online gaming, will make use of the increased bandwidth supplied by LTE. Further down the road, we can expect to see a broad range of LTE-enabled solutions such as smart metering, home automation and remote surveillance. The wholesale operator model appears bound to emerge with LTE in a number of countries. In developed countries, LightSquared, Dish and Clearwire in the United States, along with Yota in Russia, are all adopting roughly the same business model, with strategies that involve distribution via MVNOs and/or mobile operators. In developing countries, sharing a single LTE infrastructure will enable market players to earn a swift return on their investments.

1. LTE (an initialism of Long Term Evolution), marketed as 4G LTE, is a standard for wireless communication of high-speed data for mobile phones and data terminals. http://en.wikipedia.org/wiki/LTE_(telecommunication)