The Next Generation of the Unity Game Engine Unveiled 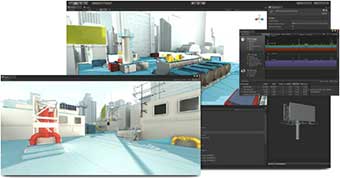 Unity Technologies, provider of the Unity multi-platform engine and development tools, is excited to announce Unity 4, the next generation of the Unity development platform. The launch of Unity 4 demonstrates the platform's AAA push that levels the playing field between the largest and the smallest studios, enabling anyone from the most indie game designer to the biggest multinational AAA studios to develop amazing groundbreaking games, and effortlessly deploy to multiple platforms. Customers who pre-order Unity 4 will be offered early access to the Unity 4 beta.

Unity 4 includes an overhaul of the Unity engine and tools suite to accommodate critical new features such as the highly anticipated all-new Mecanim character animation system, DirectX 11 support, hypermodern mobile graphics, and the addition of Adobe Flash and Linux as new publishing platforms. These new features and improvements comprise the first in a series of Unity 4 releases that will empower developers with the first truly democratic AAA game engine.

"We've been working on Unity 4 for a long, long time and are happy to finally be able to unveil its imminent arrival and outline its core features that will change the industry," said David Helgason, CEO, Unity Technologies. "The revolutionary animation system and add-on deployments to Adobe Flash and Linux are some of the critical features introduced in Unity 4, which together maintain Unity as the strongest, fastest evolving modern games development platform available."

Unity 4 includes a host of new features, updates, and improvements:

Mecanim, Unity's powerful and innovative animation technology, brings your characters to life in a few mouse clicks with incredibly fluid and natural motion. Mecanim combines a slick interface with powerful tools for creating state machines, blend trees, IK rigging, and auto retargeting of animations all inside of the Unity editor.

"The introduction of the Mecanim suite of animation tools into Unity will completely change how developers integrate interactive animations and will result in awesome new gameplay experiences from the Unity community," said Robert Lanciault, Lead Animation Developer, Unity Technologies. "These tools will allow animators to work directly in Unity to create advanced and detailed animation blend trees and state machines for incredible and natural character animation."

An impressive array of retargetable animation will be available in the Unity Asset Store. Developers will have access to a wide range of options that will help bring their characters to life with fluidity and grace.

Unity 4 fully supports Microsoft's DirectX 11. This offers developers the ability to take advantage of the GPU in new and exciting ways: increased shader capabilities with shader model 5, tessellation for smoother models and environments in game worlds, and compute shaders for advanced GPU computation.

Mobile platforms have also received a boost in visual fidelity with optimizations and new features. Unity 4 features real-time shadows on mobile, skinned mesh instancing, the ability to use normal maps when baking lightmaps, and a refined GPU profiler. It's easy to make extremely high-end visuals that scale across the best of what's available on modern PCs and the most advanced mobile graphics chips.

With Unity 4, developers can create a new game, or take existing Unity 3D content—for iOS, Android, desktop, or the Web — and publish it to the Adobe Flash Player, installed on more than a billion PCs worldwide. Leveraging its industry leading Editor productivity tools, Lightmap and Lightprobe baking, and Occlusion Culling tools, Unity 4 is the powerhouse development tool for creating 3D content for the Adobe Flash Player.

Unity 4 will include a preview of a new deployment option to publish games to Desktop Linux, clearing a path for the Unity community to bring exciting new content to the estimated 10% of the game-hungry PC market. Desktop Linux standalone publishing will be available for all Unity 4 users at no additional cost.

Furthermore, Unity 4 introduces a great many additions and improvements such as:

Unity 4 is available now for pre-order from the Unity store (https://store.unity3d.com/).

Unity 4 will be demonstrated and discussed in further detail at the Unite 2012 developer conference that takes place August 22nd - 25th in Amsterdam. For tickets and more information about Unite, visit http://www.unity3d.com/unite/.