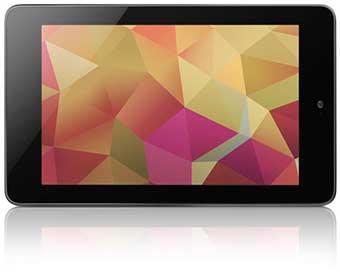 Unveiled at Google I/O 2012, Nexus 7 is the first tablet in Google's Nexus line of devices and the lead device for Android 4.1, Jelly Bean. Nexus 7 combines premium hardware designed by ASUS with the latest version of Android and all of the entertainment from Google Play. Jointly developed between ASUS and Google, Nexus 7 is the world's first 7'' quad-core tablet, built to bring consumers the best of Google in a slim and portable package that fits perfectly in the hand. ASUS will propose the 16GB version in retail at a price of 249€.

"We are very excited about this partnership and the synergy that it brings into the hands of consumers," said ASUS Chairman Jonney Shih.

"We wanted to build a tablet that was light and portable enough for you to take your favorite entertainment wherever you go, but still didn't compromise at all on power and performance," said Andy Rubin, SVP of Mobile and Digital Content at Google. "Together with ASUS, we were able to accomplish that in Nexus 7. And starting at $199 for the 8GB version, it will be something everyone can enjoy."

Nexus 7 comes with a NVIDIA Tegra 3 quad-core processor, meaning everything is faster - pages load quickly, gameplay is smooth and responsive, and running multiple apps is a breeze. A 12‐core GeForce GPU delivers advanced graphics while the patented 4-PLUS-1 CPU design gives you maximum performance when you need it and power efficiency when you don't. Nexus 7 16GB version is 249€ and will be sold by ASUS in the retail. Nexus 7 16GB will enable consumers to keep even more of their content close at hand -- even when they're not online.

With a vibrant, 1280 x 800 high-definition display, Nexus 7 brings apps, games, books and movies to life. New ASUS TruVivid technology improves color clarity and brightness, while the IPS panel delivers crisp and detailed visuals with ultra-wide 178-degree viewing angles. Scratch-resistant Corning FIT Glass and a textured chassis design that prevents hand slippage ensure Nexus 7 is incredibly robust and will meet the demands of consumers on the go. Delivering up to 9.5 hours of battery life in a profile that's 10.5mm thin and 340g light, it has the portability of a paperback book, but is connected to the entire digital world of entertainment.

Inside Nexus 7 is the powerful NVIDIA Tegra 3 quad-core processor, which delivers heart pounding performance and an immersive mobile gaming experience. Games are enhanced by Nexus 7's sensors, which include a gyroscope, accelerometer and NFC — as well as a responsive 10-finger multi touch screen — allowing users to tilt, touch and tap their way to the top of the leaderboards while exploring over 600,000 apps and games available in the Google Play Store.

Nexus 7 is powered by Android 4.1 Jelly Bean, the latest version of the world's most popular mobile platform. With smarter notifications that enable quick, on the fly responses, beautiful new widgets that put important information front and center, and home screen customization that's as easy as drag-and-drop, Android is faster and more intuitive than ever. Google's services work best on Android, as all users' content is instantly available and synced with the cloud after signing into their Google account, but it also seamlessly syncs content across users' tablets, phones and PCs for a truly integrated experience.

Nexus 7 comes with all the top Google Apps — such as Gmail, Chrome, Google+ and YouTube — putting the best of Google in consumers' hands.

Made for Google Play

Nexus 7 was made for Google Play. Everyone's favorite selection of entertainment is right in their hands: the world's largest collection of eBooks, millions of songs, thousands of movies and TV shows, and a growing selection of magazines - plus over 600,000 apps and games. Nexus 7 already comes preloaded with content so users can start enjoying the Nexus experience right away. For a limited time it also comes with a $25 Google Play store credit to purchase movies, books, magazines and more.

Google Play is the easiest way for users to enjoy their favorite content - no wires, no hassle, just pure entertainment. It's now easy to read, listen to and watch content anywhere - on a tablet, phone, or in any browser at play.google.com. Consumers can forget about cables and syncing: their music, movies, books, apps and games are instantly available across all of their devices and on the web. It's simple for users to buy a song on the web and instantly listen to it on their phone, or they can start reading a book on their laptop and pick up right where they left off on their tablet when they're on the go. Nexus 7 is all about delivering the entertainment that users love to consume.

For users who seek additional protection, Nexus 7 has an optional protective smart cover. The smart cover is a tough, yet snug-fitting polymer case with a non-slip matte texture that protects Nexus 7 from bumps and scratches, and also provides additional grip. The case comes in six different colors to allow users to pick the one which best fits their lifestyle and allows Nexus 7 owners to travel with confidence.