Unity Technologies, provider of the Unity multi-platform engine and development tools, today announced that NASA's virtual Mars rover experience was developed with Unity. It will debut online via the Unity Web Player in conjunction with the landing of the most advanced rover ever sent to Mars.

NASA's Curiosity rover, a mobile laboratory carried by the Mars Science Laboratory spacecraft, will land near the Martian equator about 6:31 a.m. BST / 7.31am CET Aug. 6. The Curiosity rover will assess whether Mars was or is today an environment favourable for microbial life.

Martian fans can help NASA test drive a new 3D interactive experience that will allow the public to follow along with Curiosity's discoveries on Mars. Using Unity, NASA is pushing new limits by rendering high-resolution terrain maps of Gale Crater, Curiosity's landing site, collected from Mars orbiters. A 3D "virtual rover" version of Curiosity will follow the path of the real rover as it makes discoveries.

By downloading Unity and trying out the experience early, the public can reduce potential download delays during landing and offer feedback on the pre-landing beta version of the experience. By crowd sourcing -- leveraging the wisdom and experience of citizens everywhere -- NASA can help ensure the best experience across individual users' varying computer systems. 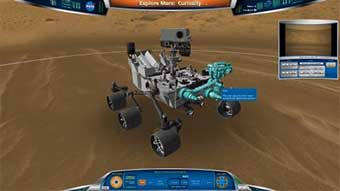 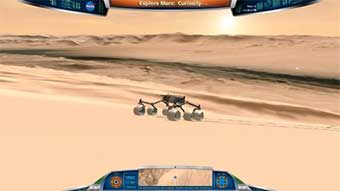 NASA's Mars Science Laboratory mission will place the Curiosity Rover onto the surface inside Gale Crater on Mars and use it to investigate the area's past and present environments. The landing will use active guidance for improved landing accuracy and a skycrane for touchdown. The rover is equipped with 10 science investigations and a robotic arm that can drill into rocks, scoop up soil and deliver samples to internal analytical instruments. The mission will assess whether the area has offered conditions favorable for life and favorable for preserving a rock record of evidence about whether life has existed there. Curiosity has the capability to drive for 12.4 miles (20 kilometers) or more during a mission lasting one Martian year (98 weeks).

"From amazing games to Mars rover mission simulation! We're so honored that Unity is being used to power a simulated experience for this historic scientific mission," said David Helgason, CEO, Unity Technologies.