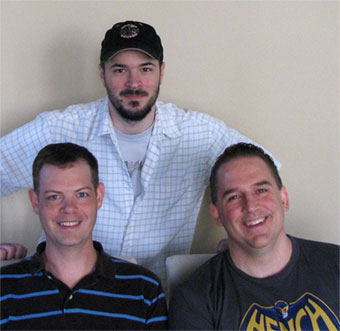 The founding team all has major game credits under their belts, as well as a high standard for games that will bear the BonusXP name. "We cut our teeth on the Age of Empires series at Ensemble Studios. We loved the team-based feel Ensemble had, particularly in its early days. So, we're bringing that back," said Dave Pottinger, BonusXP's CEO.

In addition to AAA experience, BonusXP understands the mobile and casual markets. The studio is going to build broad-appeal games with a focus on deep replay value. "Our mission is to make really fun, polished games that leave you wondering 'How'd it get so late already?' when your battery finally runs out," said John Evanson, BonusXP's director of technology.

BonusXP's first game is already in full development. "We're creating something really unique with our overall approach to art. I think it will set our games apart. I can't wait until we announce our first title later this summer," said Jason Sallenbach, BonusXP's art director.

Dave Pottinger is the CEO of BonusXP. His professional game career started in college when he financed a game company using his credit cards. Dave joined Ensemble Studios after graduation and quickly became the Lead Engine Programmer for Ensemble. Dave and John Evanson led the development of engine that powered Age of Mythology, Age of Empires III, and a fair amount of Halo Wars.

As Ensemble's director of technology, Dave built the Ensemble programming department, steered the studio's overall technology and became part of the studio's core management team. Dave was the lead programmer on Age of Empires III before moving into a design role. Dave finished his Ensemble career as the Lead Designer on Halo Wars.

After Ensemble, Dave spent a little time at Robot Entertainment and then moved to Bonfire Studios where he served as director of technology and design director. At Bonfire, Dave led several prototypes and iOS games. After acquisition by Zynga, Dave led CastleVille through initial concept, design, launch, and six months of live content.

John Evanson serves as the studio's director of technology. His game programming career began around age six, sitting on the living room floor with a spiral-bound VIC-20 manual. After graduating from the University of Connecticut in 1997, John joined Ensemble Studios in time to help launch Age of Empires.

Jason Sallenbach is BonusXP's art director, doing art stuff. Jason began his life as an artist by drawing at a very young age. A gamer since the original Super Mario Bros., Jason decided to combine his passions into a potential career after playing Doom 2 and realizing it was possible to edit the levels and monsters.

After learning how to make Half Life and Quake maps, he switched over to character texturing and modeling. Jason worked with others in the growing game art community to release many custom characters for Quake3 and Unreal Tournament. Jason got his first game art job while he was still in high school. Once out of school, it was on to Ritual Entertainment and then Ensemble.