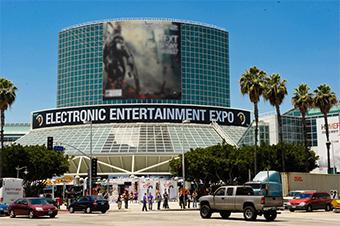 The Electronic Entertainment Expo (E3) will remain in Los Angeles for the next three years it was announced today by the Entertainment Software Association (ESA), which owns E3. It was also confirmed that E3 2013 would take place June 11-13, 2013, at the Los Angeles Convention Center, L.A. LIVE and a plethora of venues throughout downtown Los Angeles and the City.

"We are proud to partner with Los Angeles for another three years. The City serves as a strong backdrop for the video game industry's biggest announcements and we look forward to remaining in LA," said Michael D. Gallagher, CEO of the ESA, which represents U.S. video game industry. "Video games are a dominant force in the global entertainment marketplace and there is no better place to display that than Los Angeles. We look forward to continuing our relationship with the City and AEG."

In 2012, E3 brought 45,700 video game industry professionals, investor analysts, journalists and retailers from 103 countries together for a three day industry trade show that generated $40 million in revenue for Los Angeles.

"The City of Los Angeles is thrilled to welcome E3 back for another three years," said Los Angeles Mayor Antonio Villaraigosa. "My office was committed to doing whatever it took to keep the largest annual conference that the City hosts here for another three years. I personally joined in the negotiations, and we worked with all parties to ensure the needs of E3 would be met. The City is grateful the Entertainment Software Association continues to view LA, the entertainment capital of the world, as the ideal location for the world's premiere video game convention."

The three-year agreement with Los Angeles also ensures E3 will continue as scheduled alongside AEG's plans for downtown Los Angeles, including development of the new Farmer's Field.

"ESA's commitment to remain in Los Angeles is a critical endorsement of Los Angeles as one of the nation's most important convention destinations," said Timothy J. Leiweke, president & CEO, AEG. "Working with ESA to provide the confidence in scheduling they have requested has truly been a collaborative effort. We are also grateful to ESA for their thoughtful input into the design plans which will result in the most efficient and modern facilities that will not only benefit E3 but all of the new conventions that will come to Los Angeles. On behalf of our City and AEG, thank you ESA, we won't let you down."

"ESA supports AEG's mission and vision for downtown Los Angeles and the areas surrounding the Los Angeles Convention Center," Gallagher said. "We appreciate AEG's willingness to work in partnership with our organization to not only create a construction schedule to accommodate the needs of our guests but also their commitment to incorporate many of our suggestions into the design of the new venues. These resulting upgrades to the facility will truly benefit all conventions and further establish Los Angeles as industry leaders. We are glad we could come to an agreement that keeps E3 in its traditional home."

The event will be open to ESA members and non-members alike. Companies involved in console, PC, online, and social and mobile game publishing and development, qualified business partners, as well as makers of video game hardware and peripherals can exhibit.

Registration for attendees is not open, but additional details including, registration, hotel and travel accommodations, and media credentialing, will be forthcoming and available at www.e3expo.com.