A Message From Michael D. Gallagher 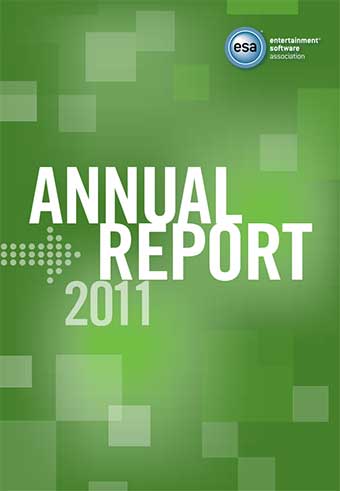 I am proud to present the 2011 Entertainment Software Association (ESA) Annual Report. 2011 was a historic year for our industry, and ESA proudly maintained its commitment to representing the business and public affairs interests of computer and video game companies during this transformative period.

Just days after the conclusion of last year's E3, the U.S. Supreme Court in June vigorously affirmed the First Amendment rights of our industry's artists and creators in the case of Brown v. Entertainment Merchants Association (EMA)/ESA. The Court's landmark ruling declared that video games enjoy the same constitutional protections as books, movies, and fine arts. It was a tremendous victory for our industry, its artists, and consumers. The decision places video games where they belong — alongside other protected forms of speech — and provides a solid defense against future attempts to institute content-based regulations for media and other creative works.

We achieved this milestone because of the perseverance of our member companies, and critical contributions from an array of organizations and individual experts spanning fields from social science and law to art and media. Thank you for your support and resolve, and for helping to amplify our industry's strong voice.

While the Supreme Court case was a primary focus for our industry last year, ESA achieved a number of other accomplishments in 2011 that bolstered our industry's foundation and continued paving the way for its future success. Featured here are some of the achievements demonstrating our forward progress:

These achievements, and the many others described in the following pages, demonstrate our industry's growing vitality and influence. Yet none of this would have been possible without the dedication and leadership of our member companies. I would like to express my gratitude to our Board members, ESA staff, and the ESRB. Together, we will enhance appreciation for games and increase understanding of the positive impact they have on the economy, education, healthcare, businesses, and the arts. I look forward to further developing our industry's critical and evolving role in positively shaping and advancing our society's future.