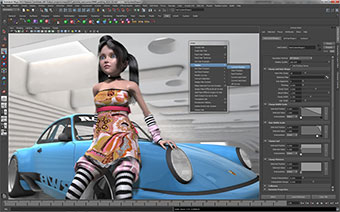 Xsens, the creator of Xsens MVN, the leading inertial motion capture solution for the film and game industry, today announced the release of the MVN Live Plug-in for Maya 2013.

"We are excited to launch this new plug-in, as it will improve the efficiency of creative decision making and speed up the production pipeline of 3D artists," explains Hein Beute, Product Manager, Xsens.

MVN Studio can also stream its motions to the MVN Live Plug-in for Autodesk MotionBuilder 2013, which is better suited for larger virtual scenes, as used for virtual production. At SIGGRAPH 2012 this setup was demonstrated for the first time by The Third Floor at the Autodesk booth.

The Maya and MotionBuilder plug-ins receive motion data from the 'Network Streamer' in MVN Studio. The Network Streamer is capable of streaming motions over a network to other applications in real-time. Examples are software for human factors analysis and VR, like Siemens PLM Software. In addition game engines like Unity and UDK, used in the setup for Grammy Award winner Skrillex, can receive MVN motion data in real-time.

Xsens is the leading innovator in 3D motion tracking technology and products. Its sensor fusion technologies enable a seamless interaction between the physical and the digital world in consumer electronics devices and professional applications such as 3D character animation, motion analysis, and industrial control & stabilization. Clients and partners include Electronic Arts, NBC Universal, Daimler, Autodesk, Sagem (Safran Group), Siemens and various other leading institutes and companies throughout the world. Founded in 2000, Xsens is a privately held company with headquarters in Enschede, the Netherlands and a US subsidiary in Los Angeles, California.