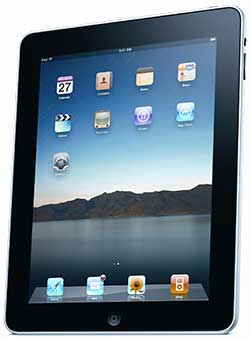 Apple's iPad is projected to account for 73.4 percent of worldwide media tablet sales in 2011, down from 83 percent share in 2010. Beyond Apple iOS and the Android operating system (OS), Gartner does not expect any other platforms to have more than 5 percent share of the tablet market in 2011.

"We expect Apple to maintain a market share lead throughout our forecast period by commanding more than 50 percent of the market until 2014," Carolina Milanesi, research vice president at Gartner. "This is because Apple delivers a superior and unified user experience across its hardware, software and services. Unless competitors can respond with a similar approach, challenges to Apple's position will be minimal. Apple had the foresight to create this market and in doing that planned for it as far as component supplies such as memory and screen. This allowed Apple to bring the iPad out at a very competitive price and no compromise in experience among the different models that offer storage and connectivity options."

Android tablets are on pace to ship 11 million units in 2011 (see Table 1), accounting for 17.3 percent of media tablet sales. This is up only slightly from Android's 2010 market share of 14.3 percent. Gartner's forecast for the Android OS has been lowered by 28 percent from last quarter's projection. The reduction would have been greater had it not been for the success of lower-end tablets in Asia, and the expectations around the launch of Amazon's tablet.

"So far, Android's appeal in the tablet market has been constrained by high prices, weak user interface and limited tablet applications" Ms. Milanesi said. "Google will address the fragmentation of Android across smartphone and tablet form factors within the next Android release, known as 'Ice Cream Sandwich,' which we expect to see in the fourth quarter of 2011. Android can count on strong support from key OEMs, has a sizeable developer community, and its smartphones application ecosystem is second only to Apple's."

Gartner analysts said Research In Motion's QNX OS is a promising platform, but it is still in the early stages of development. RIM's main challenge will be to attract more support from application developers as the company is going through a tough period, with considerable pressure on its smartphone business.

The current buzz around Windows 8 driven by the demonstrations seen at the Build conference might be short-lived if Microsoft's push to use the new OS across devices comes at a compromise in usability. Moreover, the late arrival might limit its appeal, especially to consumers, as Apple and Android will be more entrenched by then. Microsoft's platform will find its biggest opportunities in the enterprise segment, where IT departments could benefit from smoother integration with existing Microsoft software.

As more vendors will arrive in 2012, Gartner analysts said it's important they concentrate on delivering a rich user experience based on a strong tie between smartphones and tablets, a good set of apps, an intuitive user interface, and the ability to share content easily between devices.

"Most of Apple's competitors are struggling to meet Apple's prices without considerably sacrificing margins. Screen quality and processing power are the two hardware features that vendors cannot afford to compromise on," said Roberta Cozza, principal analyst at Gartner. "They should consider everything else 'nice to have,' rather than essential, in order to keep bills-of-materials costs competitive with those of the iPad."

Gartner's Special Report, "iPad and Beyond: The Future of the Tablet Market," provides insight into what consumers, enterprises and vendors can expect as the market continues to unfold. More than 20 reports examine the tablet marketplace, as well as video commentary. The Special Report is available at http://www.gartner.com/technology/research/ipad-media-tablet/future-of-tablet-market.jsp.

Ms. Milanesi and David Willis, vice president and distinguished analyst at Gartner, discuss the outlook for the market in the Gartner Webinar on Demand "iPad and Beyond: The Future of the Media Tablet Market" at http://my.gartner.com/portal/server.pt?open=512&objID=202&mode=2&PageID=5553&resId=1743724&ref=Webinar-Calendar.