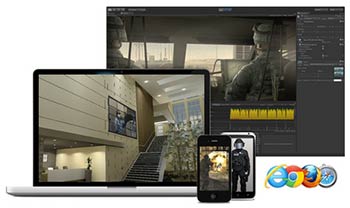 Unity Technologies, provider of the Unity multi-platform engine and development tools, today announced that the growth of Unity in serious games and virtual environments, from the military to education to medical, continues to grow in number and depth of their application and range of customers. Serious games projects made with Unity also swept the majority of the category awards at the recent Serious Games Showcase and Challenge at the I/ITSEC conference. Unity has also been reissued certifications by both the US Army and US Air Force.

"Unity has emerged as the engine of choice for a wide variety of industries creating and deploying interactive training, visualizations and serious games," said David Helgason, CEO and co-founder, Unity Technologies. "Our accessible platform and business model creates incredible new opportunities for developers - both for small businesses and large organizations - to create incredible interactive experiences that have real world applications. We are committed to continuing our work with forging the future for interactive applications outside of traditional games."

For example, the NOAA leverages the power of Unity to create powerful data visualizations for science analysis, education and outreach. One of their products named TerraViz is a multi-platform interactive visualization tool that accepts information in formats like KML or data provided through web map services (WMS) and displays the results in a 3D environment.

"By using Unity, we are able to seamlessly display millions of points of information at game-level frame rates," said Eric Hackathorn, data visualizations and games program manager, NOAA. "NOAA produces thousands of gigabytes of information every day, and Unity is a compelling solution for visualizing our big data."

Announced at the recent Interservice/Industry Training, Simulation and Education Conference (I/ITSEC), four of the six category winners of the Serious Games Showcase & Challenge (SGS&C) were made with Unity. In addition, approximately 40 percent of both the overall submissions and finalists for SGS&C were Unity projects. The judging included more than 100 people from academia, government and industries around the globe for the official awards of the I/ITSEC conference that attracts 20,000 attendees each year. The top, award-winning projects using Unity technology were:

"Breakaway Games specializes in creating learning and serious games for commercial, education and government clients," said Jenn McNamara, Vice President of Breakaway Games, Subcommittee Member of I/ITSEC and Industry Lead for the Serious Games Showcase and Challenge Committee. "During our 15 years serving these clients we've worked with a number of game engines. What is unique about Unity is the ability to quickly create and iterate on game play concepts, which we have found essential in our solution development and client management. Unity's seamless blending of next-generation visuals, multi-platform support and ease of use have led to its rapid rise for serious games creation as reflected by the spike in Serious Games Challenge and Showcase submissions using Unity."

Unity Technologies also recently completed work with representatives of Canadian National Defence to create a firewall compliant Closed Network Edition of the Unity Web Player, for use on Canadian secure networks. The Unity Closed Network Web Player was certified for use on Canada's DWAN defense network in the fall of 2012. Special licensing terms apply for using Unity on defense networks, please contact unitysimunity3d.com for details.