Geomerics to Bring Next-Generation Lighting to Xbox One 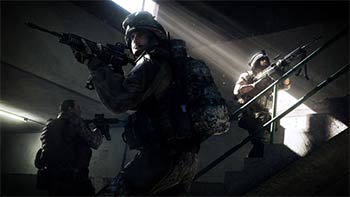 Geomerics, the leading lighting technology company in the video game industry, today announced its support for Xbox One, the all-in-one games and entertainment system from Microsoft. Enlighten is now available to developers working on Xbox One titles, bringing real-time global illumination to the next generation of games.

Enlighten is award-winning lighting software and the world's first fully real-time global illumination technology. Packed full of time-saving workflow features and a lightweight runtime, Enlighten is the only solution proven to deliver fully dynamic lighting on today's PCs, game consoles and mobile platforms. The technology has been used to add lighting effects to some of today's most advanced and best-selling titles, including Battlefield 3, Need for Speed: The Run, Eve Online, Medal of Honor: Warfighter and the upcoming Dragon Age 3, XCOM: The Bureau, and Battlefield 4.

Xbox One promises a dramatic increase in memory and compute resource, which will free developers to unleash the full creative power of dynamic lighting and to finally extend cinematographic film practices to dynamic immersive worlds.

"We are delighted to be working on Xbox One," said Geomerics' founder Dr. Chris Doran. "The hardware is perfectly balanced for a next generation console and a huge step forward from the current generation. Real-time global illumination was a big deal for games running on the current generation of hardware, but it required developers to make some compromises. With Xbox One, those days are behind us. We can finally unleash the full power of Enlighten, and allow game developers working on Xbox One games to bring far deeper levels of dynamism and quality to game lighting. We cannot wait to see what developers produce with Enlighten."

VP Sales Rob Precious added: "The amount of interest from developers for Xbox One is huge. The next few months are going to be very exciting for us. We have seen what developers have been producing on Xbox One and are looking forward to publishers revealing details of some of the titles we have been working on."

Geomerics delivers cutting-edge graphics technology to customers in the games and entertainment industries. Geomerics' Enlighten technology is behind the lighting in best-selling titles including Battlefield 3, Medal of Honor: Warfighter, Need for Speed: The Run, Eve Online and Quantum Conundrum. Enlighten has been licensed by many of the top developers in the industry, including EA DICE, EA Bioware, Take 2, CCP and Square Enix.

Geomerics has developed a reputation for the excellence of both its technology and its support. We work in partnership with many of the leading companies in the games industry and our global customer base includes the USA, Canada, Western and Eastern Europe, Japan and Korea. Visit www.geomerics.com for more information.

Enlighten's revolutionary technology brings global illumination to real-time gaming. For the first time, all aspects of lighting can be updated in real time, in game, on today's consoles. Instant feedback opens up new worlds of creative possibilities for gamers and artists alike.

Enlighten offers enormous flexibility and we work in partnership with developers to ensure that the lighting in their game is tuned to the director's creative vision.

The Enlighten runtime is available for Xbox One, PlayStation4, Xbox 360, PlayStation3, Windows PC, PlayStation Vita, Wii U, Mac, Linux, Android and iOS. Our authoring and baking tools run on Windows PC and the results can be used in game on any platform.