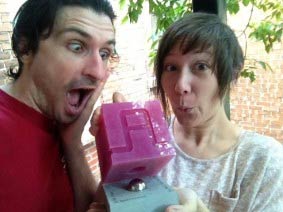 After two years of A MAZE. Indie Connect, we decided to change the name of the festival to A MAZE. / Berlin.

A MAZE. / Berlin is an international platform for independent games that invites professionals and creatives from various fields to exchange their knowledge and visions, presenting their projects, playing, making contacts to collaborate on future projects. A MAZE. / Berlin will take place from April 9 to April 11, 2014.

The submission of games for the A MAZE. Awards is open from November 15, 2013 to February 15, 2014. Find more details about submission and ticketing here: www.amaze-berlin.de

In 2014, the A MAZE. Award will have four categories: with the additional three awards A MAZE. wants to celebrate games that usually don't get recognition at festivals. The international jury has the honorable task to select the winners of the following categories:

This award goes to the best game overall - in terms of game play, art, innovation, music, story and interaction. The prize is dedicated to the masterpiece of the selection. Basically, it is the continuation of the previous A MAZE. Award.

This award goes to the best game that can be played by two or more people in the same room (local multiplayer), and includes some digital element - fully analog games won't be accepted.

In 2014 A MAZE. will establish an award for games that transport no compromises, reckless art, subversive fun and provoking progression. This award is looking for the best glitch, punk and art games.

In addition to the three awards above, in 2014 an Audience Award will also be introduced. The winner will be voted by the spectators during the course of the festival.

Thorsten S. Wiedemann, festival director: "A MAZE. was founded in 2008, with the idea to celebrate the convergence of games and art. Now it's time to celebrate games for what they are: an art form, a medium of authorship, an intelligent communication through artistic use of interactivity and technology, education and entertainment… video games are the new punk rock. A MAZE. / Berlin will show again an unique and contemporary selection of the best independent games worldwide. The heart of the festival is the A MAZE. Award, won in 2012 by Proteus (Ed Key, David Kanaga) and in 2013 by Spaceteam (Henry Smith). These two games won "The Most Amazing Game Award" for breaking with current conventions and truly underline the perception of what A MAZE. stands for. I'm really looking forward to see the submissions from game creators all around the world, who are sharing our vision."