Smartphone Prices Race to the Bottom as Emerging Markets Outside of China Come into the Spotlight for Future Growth, According to IDC

Emerging markets have become the center of attention when talking about present and future smartphone growth. According to the International Data Corporation (IDC) Worldwide Quarterly Mobile Phone Tracker(1), in 2013 the worldwide smartphone market surpassed 1 billion units shipped, up from 752 million in 2012. This boom has been mainly powered by the China market, which has tripled in size over the last three years. China accounted for one out of every three smartphones shipped around the world in 2013, equaling 351 million units.

Recently the surge in growth has started to slow as smartphones already account for over 80% of China's total phone sales. The next half billion new smartphone customers will increasingly come mainly from poorer emerging markets, notably India and in Africa.

Emerging markets in Asia/Pacific outside of China, together with the Middle East and Africa, Central and Eastern Europe, and Latin America, account for four fifths of the global feature phone market, according to IDC data. "This is a very big market opportunity," said Simon Baker, Program Manager for mobile phones at IDC CEMA. "Some 660 million feature phones were shipped last year, which could add two thirds to the size of the current global smartphone market."

India will be key to future smartphone growth as it represents more than a quarter of the global feature phone market. "Growth in the India market doesn't rely on high-end devices like the iPhone, but in low-cost Android phones. Nearly half of the smartphones shipped in India in 2013 cost less than US$120," said Kiranjeet Kaur, Senior Market Analyst for mobile phones at IDC Asia/Pacific.

"The opportunity gets larger the lower the price falls," continued Baker. "If you take retail prices without sales tax, in 2013 nearly three quarters of the US$100-125 price tier was already accounted for by smartphones. Within US$75-100 the proportion was down to just over half, and between $50-75 it was not much more than a third."

Many smartphone vendors have begun gearing up for this next wave of cost pressure. Samsung is increasingly switching production to Vietnam, where manufacturing costs currently undercut mainland China. Even Hon Hai, one of the largest contract manufacturers for handsets in China, has announced plans for a plant in Indonesia to furnish a lower production cost base. 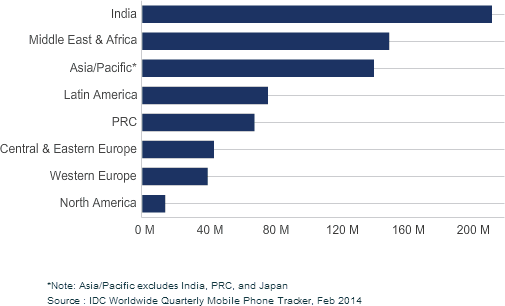