"Based on historical seasonality trends, new physical retail sales of video game hardware, software and accessories should come in flat to down by as much as 2% once full year sales are in." 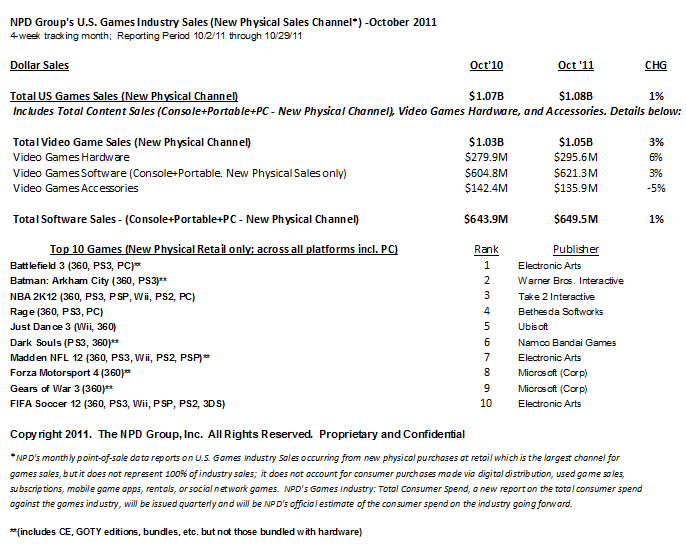 "Battlefield 3 captured the top spot for new physical sales at retail, selling just under 2 million units across all platforms. Of course, given its strong heritage in PC gaming, I would expect that there were notable sales that occurred via digital downloading as well."

"Batman: Arkham City was in second place with over 1.5mm units of new physical retail sales across two platforms. The game received outstanding reviews and is the 12th highest rated game of all time according to Metacritic."

"Just Dance 3 and Dance Central combined to lead the dance genre to a 135% unit sales increase over last October."

"Skylanders: Spyro's Adventure, with its unique integration with physical toys, came in just outside the top 10, ranking #11 in new physical unit sales for the month of October."

"Within the top 10 genres ranked on new physical unit sales for the month of October, First-Person Shooters grew, driven by Battlefield 3 and Rage; General Action grew, driven by Batman: Arkham City; and Dance grew due to Just Dance 3 and Dance Central. Other genres that realized growth include Platform/Scrolling Character, which was driven by Skylanders: Spryo's Adventure; Action Oriented Racing, driven by Forza; and Football, driven by Madden."

"Accessory sales declined versus last October, but more so in dollars than in units due to a decline in average selling price. The accessory types that declined the most were Gamepads and Specialty Controllers."