Overall, the new physical portion of industry sales was essentially flat versus last November. While content sales grew substantially thanks to a great slate of new content, a decline in average retail price in all categories with the exception of portable hardware resulted in flat dollar sales even though unit sales grew for console hardware, as well as console, portable, and pc software.

New Physical Retail sales are likely to end December in the range of flat to down 3% in dollar sales based on historical seasonality trends.

This is the fourth consecutive month in which the Xbox 360 has been the top selling hardware system. The gap between 360 sales and sales of the next best selling platform was the largest we've seen since December 2008 when the Nintendo DS was the top selling system.

The month-over-month sales increase versus October that all systems realized is in line with the range we typically see going into November, so hardware performed in line with typical seasonality trends.

In one month, Elder Scrolls V: Skyrim is just about half a million units shy of matching Elder Scrolls IV: Oblivion in lifetime sales. Its first month performance was a five-fold increase over Oblivion's first month sales. The game garnered outstanding review scores.

When looking at the top 10 best selling titles at the SKU level, both Super Mario 3D Land and Halo: Combat Evolved Anniversary would have been included.

The majority of the decline in dollar sales versus last November can be attributed to Specialty Controllers resulting from tough comparisons against last year when the Kinect launched. 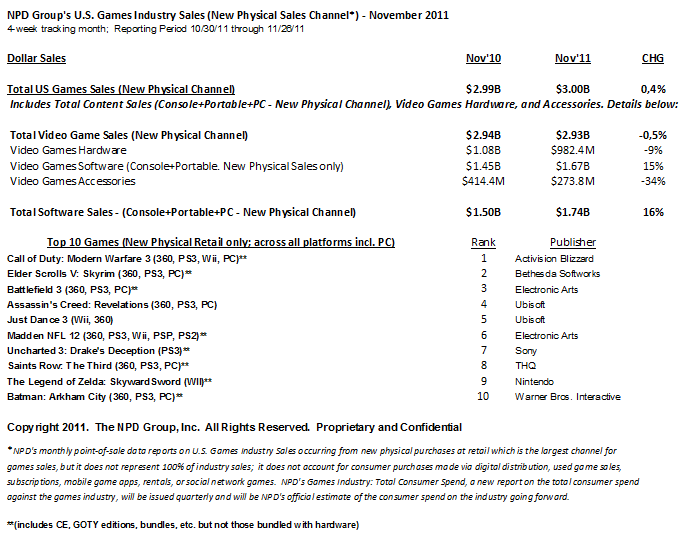