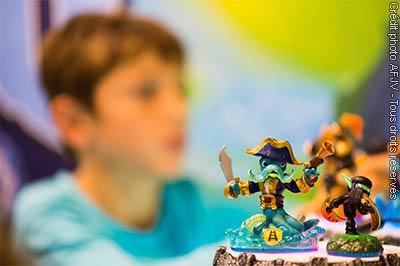 In the past six months, parents estimate that they have spent an average of $131 on IGT games and characters from Skylanders, Disney Infinity, and Nintendo amiibo franchises for their primary player. The perception of this investment is very positive compared to other types of toys or video games these parents could spend money on for their child, with 77 percent saying it was definitely or probably worth the investment. Two-thirds of parents say that they are extremely or very likely to purchase a new IGT game (65 percent) or a new IGT character (67 percent) in the next six months.

IGTs are engaging, with only 7 percent of families having abandoned play altogether. One of the key reasons for this abandonment has been that their child or children may have outgrown the games; these households mainly have teenage children that have aged out of the category, with very few having children under the age of 9.

"This study shows that consumers are moving franchises, but not abandoning the category," said Liam Callahan, industry analyst, The NPD Group. "This bodes well for the overall health of the space, especially for new entrants, as it shows consumers are willing to try new franchises."

It's a Family Affair

Within households currently playing IGT games, 52 percent indicate that adults (age 18+) are among those that play.

"Though adults may also be playing, children are incredibly influential in the discovery and purchasing of IGT games and characters, with their opinions and preferences greatly motivating their parents' purchasing behaviors," said Callahan. "These games appeal to a wide variety of player types, and it's an appeal that may grow further with new entrants in the category."

Character Play Time With and Without Video Games

Among all IGT players, the majority of their time with these characters is spent playing video games, with 22 percent of total character playtime being spent playing with them as toys, and not with a video game console.

As expected, the likelihood of playing with characters outside of video games decreases with age - a simple function of aging out of that type of play. However, 40 percent of parents state that that their 13-17 year olds continue to play with IGT characters like toys or action figures, compared to 77 percent for 2-5 year olds.

"The mass appeal of interactive gaming toys presents an opportunity for licensors looking to leverage their brand in new and innovative ways," said Callahan. "Licensors can increase awareness and sales to consumers who may not otherwise interact with them, extending the value of the brand beyond its core market."