Unity and Adobe Collaborating on Unity for Flash Deployment Add-on 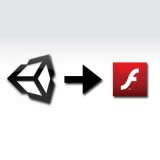 Lot's of news around Flash today! Let's get started:

We are committed to building the best tool there is to create content for the Flash platform, and are doing it with Adobe's support and blessing to make the best product possible. You can check out the latest Adobe blogpost[1] about our collaboration and their push to bring high-quality 3D games to Flash.

We've been amazed at the content that has been created http://unity3d.com/contest/flash-in-a-flash/ with the public preview (which is part of Unity 3.5 which you can download today http://unity3d.com/unity/download/). We took the feedback we got from that and fixed a lot of bugs and added some much requested features (Asset Bundles, WWW support, and tons of optimizations and bug fixes). We're working on getting a new build with these new features out there very soon and expect to ship a final version later this year.

Adobe will charge publishers 9% of only the revenues directly caused by the game which exceed $50K.

If revenue is not directly caused by the game you pay nothing. i.e. An online teaser level for a iOS / Android game, a car company having a realtime 3d demo of their newest model which you can inspect and drive around, a 3d walkthrough for a library, etc, all would not pay the revenue share.

It's also worth noting that the new Adobe license will prohibit scenarios where you'd have the first level of a game in the Flash Player, and the full experience inside the Unity Web Player. Alas, this is something you'll need to be aware of if you were considering such a route.

We are excited about what you'll be able to do with Unity on the Flash platform and look forward to help you get the most out of it.