The market for computer and video games continued to exhibit significant growth in 2017. Compared to 2016, the overall market grew by 15 per cent, to more than 3.3 billion euros - meaning that the German games market topped the 3-billion-euro mark for the first time ever. This information was announced today by game - the German Games Industry Association based on data from market research institutes GfK and GfK Entertainment.

"For many years now, the games market has been growing more dynamically than any other sector in media and culture - both globally, and in Germany,' says Felix Falk, Managing Director of game. '2017 was a particularly successful year for computer and video games : There was an enormous surge in market growth thanks to new or revamped games consoles and countless blockbuster games. In order for German game developers to finally have the opportunity to benefit from this strong market growth, the subsidies for the games industry agreed upon by the governing German political parties CDU, CSU and SPD must be implemented as soon as possible." 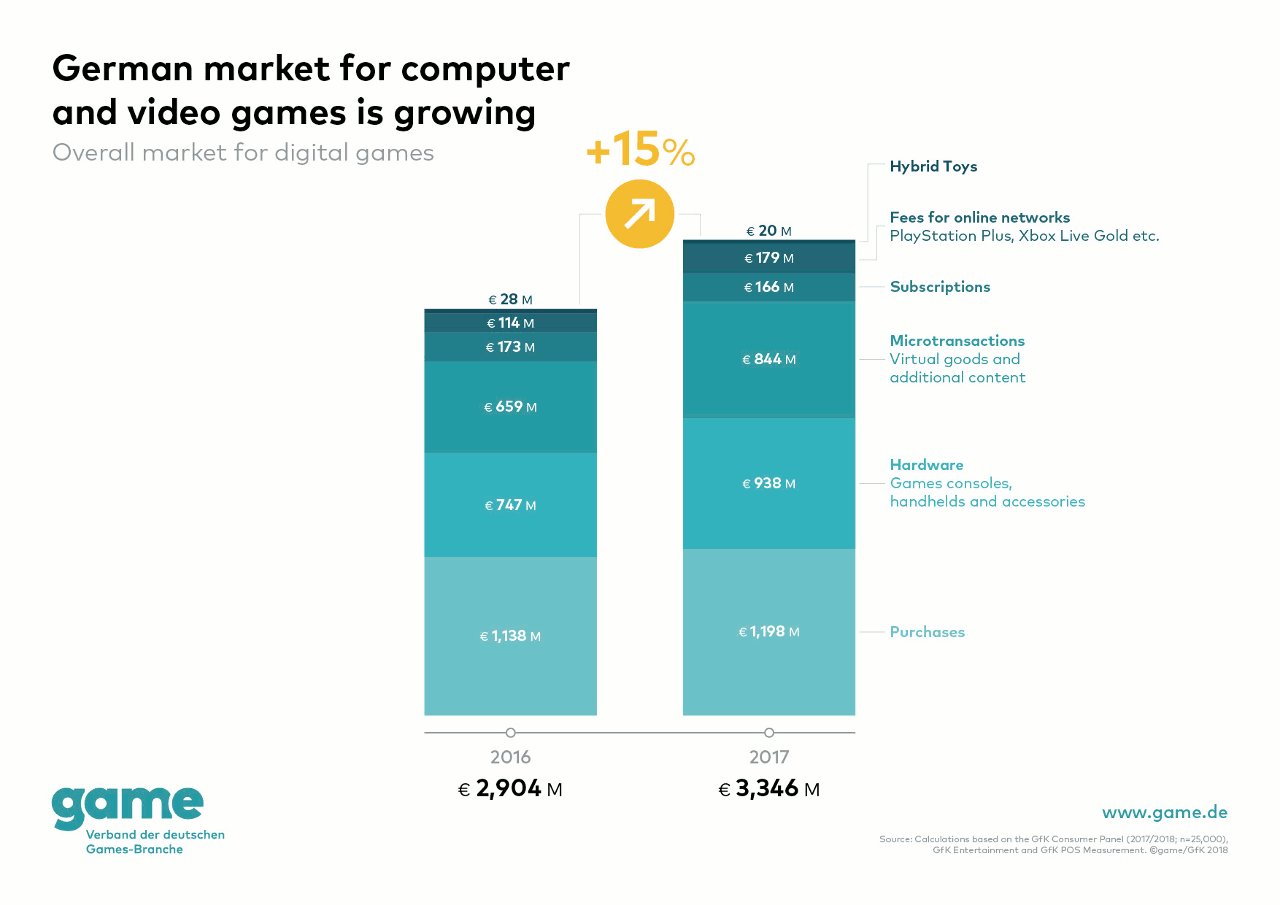 The market for games consoles and peripherals grew particularly strongly in 2017, expanding by 26 per cent, to 938 million euros. Revenue from games for PCs, consoles, handhelds, smartphones and tablets also rose significantly in 2017 : whilst games software generated 2.2 billion euros in revenue in 2016, that number rose to 2.4 billion euros in 2017 - an increase of nearly 12 per cent.

About the market data

The data used is based on surveys conducted by the GfK Consumer Panel, GfK Entertainment and GfK POS Measurement. The methods used by GfK to collect data on Germany's digital games market are unique in terms of both their quality and their global use. They include an ongoing survey of 25,000 consumers who are representative of the German population as a whole regarding their digital game purchasing and usage habits, as well as a consumer panel. The data collection methods provide a unique insight into the German market for computer and video games.

We are the association of the German games industry. Our members include developers, publishers and many other games industry actors such as e-sports event organisers, institutions of higher education and service providers. As the sponsor of gamescom, we are responsible for the world's biggest event for computer and video games. We are an expert partner for media and for political and social institutions, and answer questions relating to market development, games culture and media literacy. Our mission is to make Germany the leading location for game development.